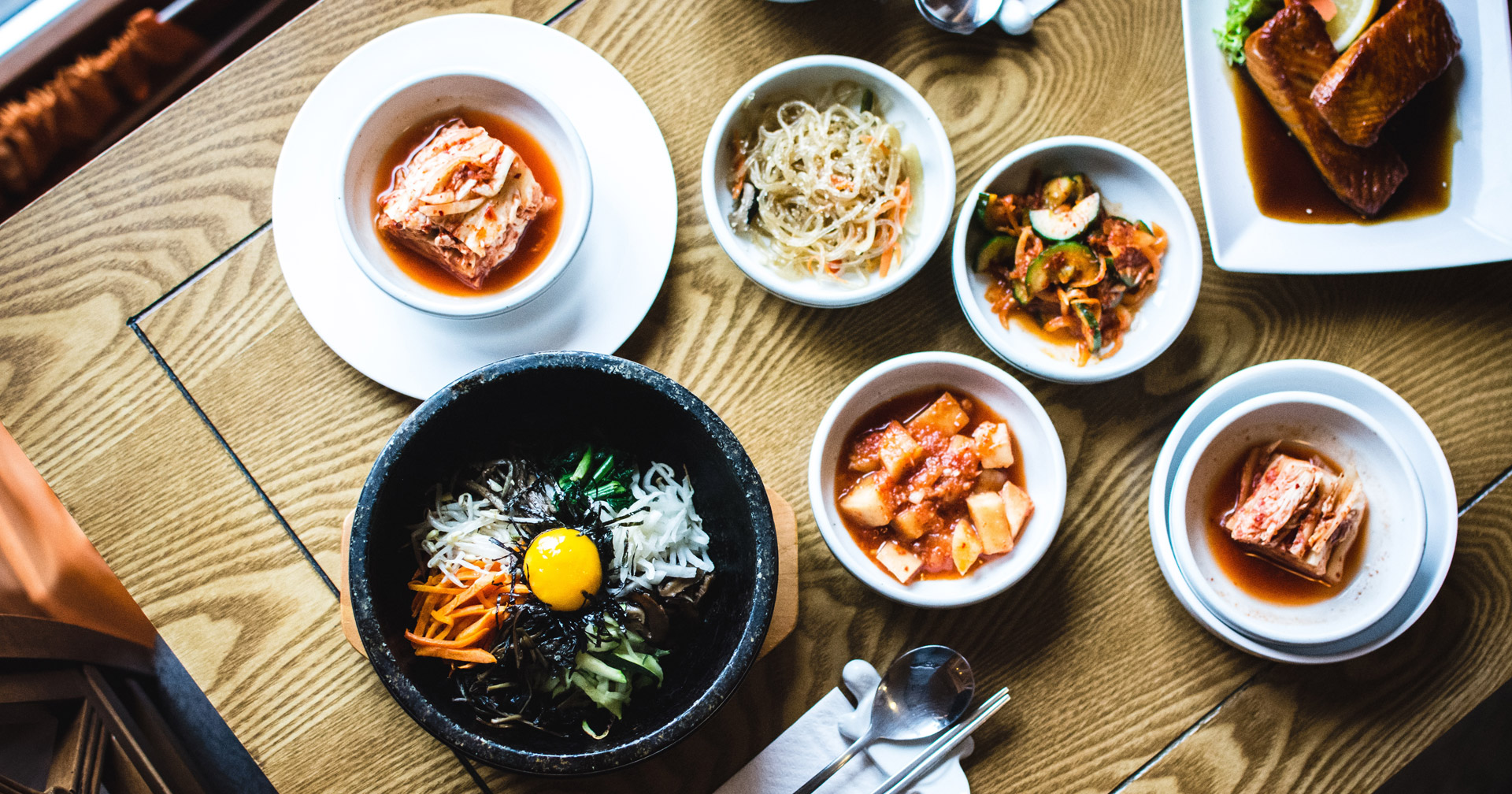 Whether you’re after international flavours or seeking that perfectly cooked steak, Geelong’s eateries have you covered. Whether in the centre of the city or on the outskirts, you’ll find a vibrant food culture emerging. Geelong’s dining scene is increasingly reflecting the multiculturalism and diversity of Victoria’s second largest city. Haven’t dined in Geelong since Kardinia Park changed names? Check out these new eateries on the scene.

Late last year, Geelong’s heritage-listed Custom House got new life breathed into it with the opening of this Greek restaurant. With chef Peter Conistis (formerly of Alpha in Sydney) at the helm, the seafood-focused tavern’s specialities are its King George whiting plaki and twice cooked octopus. A lunch express menu, divided into ‘gaia’ (land) and ‘nero’ (sea), is the perfect opportunity to sample several meze-style dishes.

While there’s no lack of options for steak lovers in Geelong, centrally located Emerge is the newest offering. This family-friendly restaurant cooks up a variety of locally-sourced scotch fillets, eye fillets, rib eye, marble score and porterhouse steaks. Open late, it’s a great place to fit in a meal after the footy siren sounds.

El Santo De Los Tacos is a revamp of the old Mexican Republic, with new owners bringing with them a fresh menu. Relaunched in May, the centrally located venue’s décor is as vibrant and loud as its menu is flavoursome. Try a trio of tacos or tackle a Californian burrito, a carb lover’s dream with chips both inside and on the side.

Little Malop Street was recently transformed into a laneway precinct, and this bustling, vibrant area feels like the perfect home for this for café and bar. Swiftly making an impression thanks to their moreish meatballs, you ‘build your own meal’ – simply pick a ball (there are vego options too), a base and a sauce for fast service and tasty fare.

A Korean restaurant with a dash of Japanese, you’ll find this cosy yet minimalist and modern eatery on Pakington Street in Geelong West. Traditional Korean offerings such as bibimbap, beef bulgogi and spicy pork arrive on a hotplate, and the desserts, such as the deep fried chocolate-filled spring rolls, sizzle too.

NEXT UP … The team behind Melbourne’s popular Higher Ground are set to open The Beach House on Geelong’s foreshore in December.

If you often experience order FOMO, you’ll love the sharing plates at this stylish Middle Eastern dining hall and bar in Geelong West. Much of the produce is locally sourced, with Zeally Bay bread from Torquay, eggs from Stonehaven, and cheese and seafood from Drysdale. Pass around the leek and feta croquettes, fried school prawns and ricotta dumplings, but keep the whipped cheesecake just for yourself.

Directly on the waterfront, Wah Wah Gee on Cunningham Pier offers up Asian-fusion dishes that are great for sharing. The extensive menu includes vegan, vegetarian, gluten-free, onion and garlic-free and dairy-free options, but you can’t go past a simple Thai green curry. If you get decision fatigue, simply ask for the ‘Feed Me’ option ($52 per person) to get your dishes selected for you.

Bistrot St Jean, situated on busy Moorabool Street, has been giving locals a taste of French dining since 2014. Perfect for a romantic dinner or a cosy night out, the menu isn’t extensive but the offerings (think baked oysters, homemade gnocchi, onion soup and cheese soufflé) are superb.

Geelong can’t get enough of its French cuisine, so Bistrot Plume is an equally popular option in the suburb of Belmont. With a modern take on a rustic aesthetic (think wooden floorboards and whitewashed brick walls), it’s the perfect setting for breakfast, lunch or dinner. Their three-course shared feasts on Sundays shouldn’t be missed – expect cured meats, mussels, croquettes, sautéed greens and a decadent dessert.

A stone’s throw from Geelong Gallery, this chic restaurant filled with striking artwork

specialises in contemporary Australian food with a South American twist. Seafood fans will love the freshly shucked oysters, grilled octopus, kingfish ceviche and Alaskan king crab. Pick a South American-inspired side such as plantain chips or Manchego empanadas and save room for the sopapillas, scrumptious fried pastries stuffed with cinnamon, caramel and chocolate.

TAKE A BOW … For modern Australian cuisine, you can’t go past IGNI, which was awarded one hat in the Australian Good Food Guide this year. It was previously named Gourmet Traveller’s Best Regional Restaurant two years in a row.

Venture down Swanston Street towards the Barwon River and you can’t miss the towering red brick chimney. Housed in an old textile mill, the brewery is responsible for brewing the east coast’s Little Creatures’ bevvies and also houses the Little Creatures Canteen. Order a pizza and don’t skip dessert – the honeycomb ice-cream sandwich is too delicious to share. Then pop in next door to White Rabbit, Little Creatures’ sister establishment with a more sophisticated vibe.

Gypsy brewers Valhalla travelled on down from Torquay to Geelong to open a taproom late last year. The venue, located centrally on Union Street, showcases Valhalla’s beers as well as a small selection of other local brews. The menu on offer is small, but the toasty jaffles (such as the Spaghetti Bolognese and the mac and cheese with pickles on top) are hearty enough to soak up the alcohol and keep you upright.

The first thing you’ll notice about the Victorian-style pub is the recently restored 1920s façade. This centrally located venue has remained a loyal favourite among locals who flock to its expansive beer garden (Geelong’s biggest) in summer. It is renowned for its extensive steak menu – try the ‘Tomahawk’ 1kg rib eye if you’re particularly ravenous.

While the original Geelong Hotel is long gone, this incarnation is a relatively new – and modern – kid on the block. Previously the old Corio Hotel, the Yarra Street venue received a revamp in 2015. Popular with Deakin University students, the hotel hosts vegan banquets on the first Monday of the month ($50 for a three-course meal). Wash the granola-topped grain and beetroot salad down with a glass of vegan-friendly wine.

A 300-seat restaurant overlooking a vineyard located just 20 minutes outside Geelong, this bright and spacious farmhouse is the perfect spot for a boozy lunch. You can even sink into a bean bag on the lawn to really unwind. It’d be criminal not to try the cider (choose from apple, pear or draught, all brewed on the premises), and it’s fitting to opt for one of the apple-inspired mains such as the mustard cider pork shoulder or pork belly with saffron apple.

SPECIAL MENTION… For 30 years, The Barwon Club has been staging local and international acts. Music lovers can grab a quick feed in the front bar before a show.

Backyard littered with lemons? Exchange your produce for free coffee at Little Green Corner. Located in the centre of Geelong (look out for the green building on the corner, as its name suggests!), this down-to-earth café has a kitchen garden as well as its own farm in nearby Waurn Ponds, the source of much of their fruit, veg and eggs – which they use in dishes like the broccoli and cauliflower omelette and caramelised onion tart.

North Geelong is an industrial area home to the very popular Geelong Vintage Market, where this adorably twee café is located. Fittingly, the café was built from recycled timber and is kitted out with vintage pieces from the market, resulting in a bright and cheerful aesthetic. This is also reflected on the menu, with classic and hearty dishes such as mac and cheese and a colourful winter fruit porridge.

Housed in a converted auto paint shop in the west of Geelong, this is a great place to grab a drink and a meal Tuesday to Sundays. $5 pizzas are served up from 5pm on Fridays, or instead, you can tuck into a steak sandwich or fried chicken burger. Feeling more virtuous? There’s also a decent selection of healthy dishes (think Buddha + poke bowls) and green smoothies.

KING OF THE CASTLE

Directly next door to Pako Raw is another spacious venue that was also once an automotive garage. It retains its industrial look yet with a splash of green thanks to the many indoor plants hanging from the high ceilings. The menu also has a plant vibe, with a sizeable seasonal menu on offer – try the sweet tater fries with a burger, or the filling vegan tahini bowl. Styled to perfection, this is food designed to be Instagrammed.

Nestled within Geelong’s shopping district, the corner café offers a refuge from the hustle and bustle. It’s a great people-watching spot, best accompanied by classics such as smashed avo or pulled pork on seeded sourdough. With 10 cents from every coffee sold donated to the charity One Girl, indulging your caffeine craving here feels like the right thing to do.

THIS IS DIFFERENT … enjoy a hot dog at creative space Analogue Academy (a gallery/art studio/film lab) while you develop your photos, old-school style.

It’s estimated that there are over 6,500 native food species in Australia – how many have you tried? You’ll probably get a chance to sample more, with the popularity of indigenous foods making it likely more will appear in restaurant menus and supermarkets in the future.
Contact
Copyright Samantha Allemann 2023 - All Rights Reserved
Back To Top
×