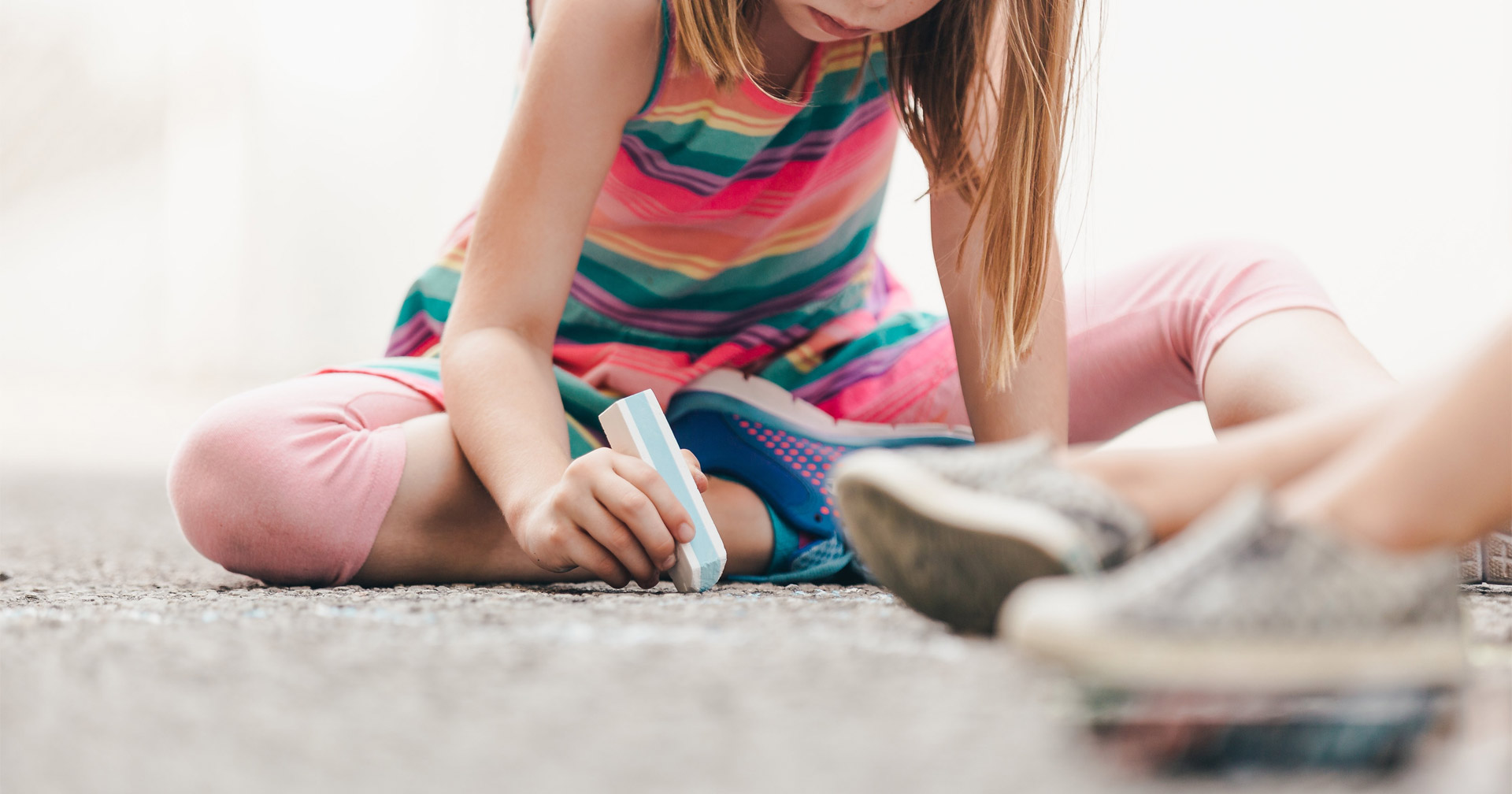 Hiding behind mum or dad’s legs, observing a game rather than joining in, avoiding eye contact with others, blushing when spoken to, talking in a whisper – these can be familiar observations of a shy child.

While shyness isn’t generally cause for alarm, it can bring about distress and anxiety within social situations, particularly those the child can’t avoid (such as going to school).

If your child is shy, you may be straddling the line between honouring who they are while encouraging them to try things out of their comfort zone. How can you raise your child to thrive in this extroverted world while staying true to themselves? Firstly, it’s important to understand what shyness is and how it differs from introversion.

In the bestseller Quiet: The Power of Introverts in a World That Can’t Stop Talking (Crown, 2012) author Susan Cain defines shyness as being “the fear of social disapproval or humiliation, while introversion is a preference for environments that are not overstimulating.”

Not all introverts would be considered shy – they simply choose to spend more time alone than an extrovert would. Someone who is shy may not want to be left alone, but instead is struggling with articulating their desire for connection. The child you see standing on the sidelines of a game may actually want to be involved yet is too timid to express their needs. When asked to play they might still decline or deflect the attention, unable to move past their fear of a social situation that seems scary to them.

Dr Sian Prior, the author of Shy: a memoir (Text Publishing, 2014), says shyness can often manifest as social anxiety, particularly in those far down the withdrawal end of the spectrum. “Our nervous systems are hard-wired to avoid those we don’t know intimately,” says Prior. “The essence of that anxiety, when it’s induced by shyness, is a fear of negative evaluation. I sometimes think of it as fear of rejection.”

Her father being a very shy man, Sian notes it wasn’t surprising that she inherited a similar temperament. Research isn’t conclusive as to whether there is such a thing as a ‘shy gene’, although it’s understood that shyness isn’t just a mirroring of learned behaviours either.

While Melbourne mother Isabella Egan’s own parents didn’t struggle in social situations, she recalls being a shy child and an even shyer teenager. “My parents would encourage me to try activities that would take me out of my comfort zone, but I never felt pushed,” she recalls. “I used to love sitting with my parents and their friends and quietly listen to their conversations. I was always the quiet one, and that was okay.”

“Shy feelings are normal; everybody feels shy on occasion,” says Dr Claire A. B. Freeland, a US-based psychologist with over thirty years of experience working with families in private practice. Freeland has co-authored four books teaching children and teens how to manage their emotions, including What to Do When You Feel Too Shy (Magination Press, 2016).

“Children who feel shy consistently in social settings may be referred to as shy children,” she says. “They tend to be wary in unfamiliar social situations and self-conscious when they perceive they are being evaluated by others. These children may take longer to adjust in specific situations, but typically, they warm up and join in.”

Freeland points out that children experiencing shyness may be misperceived as being disinterested, unfriendly or disobedient. “However often these children are simply taking their time to observe and get used to the setting they are in,” she says. “They don’t often get the luxury at moving at their own pace though, with parents, teachers or friends perhaps rushing them through this process. It’s a misunderstanding of shyness that can result in a less than gentle approach to move past it.”

Prior says that people can mistake shyness for all sorts of negative traits. “Oppositional behaviour, attention-seeking behaviour, moodiness, emotional withdrawal, even laziness,” she says. “Some people find it hard to understand why shy children are often fearful of interacting with other people, especially people they don’t know well. It is important to understand that much of this fear is ‘pre-programmed’, if you like – our nervous systems are primed to react in this way.”

As recounted in her memoir, Prior’s shyness caused her to feel misunderstood at times, especially so when she was a teenager. “It was sometimes interpreted by my family as sulkiness, moodiness and a stubborn resistance to participating in family activities,” she recalls. “I don’t doubt it looked that way. Since my book was published, my mother has expressed regret that she didn’t fully understand why I was so unhappy at that time.”

How can parents help?

Knowing when to step in and help your child through their shyness can be difficult, as you can risk causing your child anxiety, or should your approach be too forceful, result in them retreating further.

Simply acknowledging your child’s feelings and demonstrating your acceptance will help them feel understood and supported. It’s equally important to prepare your child for new experiences and help ease their way through difficult transitions. “Exposure to these new experiences shouldn’t be avoided nor rushed,” says Freeland. “Set a pace that’s comfortable for your child. If it’s not as fast as you’d like it to be, remember to stay calm.”

Whether you’re the life of the party or quite content keeping to yourself, remember that your child will look to you for cues on how to socialise. Communicate confidence, friendliness and social graces.

Bonnie Yates, a social worker and counsellor from Relationships Matter in South Australia, echoes Freeland’s sentiments around modelling assertive behaviours. But while your focus is on your child, don’t neglect your own self-care. That’s easier said than done of course, but looking after yourself is going to help you better look after others. “Make time for rest, relaxation and activities you enjoy, so you have the energy to support your child on their journey towards confidence,” says Yates.

Egan, who has recently become a parent, is hoping that her own daughter isn’t as affected by shyness as she was. “I hope she doesn’t experience the same level of discomfort I felt in social situations,” she says. “I remember feeling sheer terror when having to give presentations in school – heart racing, sweaty palms, stomach aches, that kind of thing. I would dread school swimming lessons and panic if I was late to class, because people would turn to look at you, and I couldn’t bear that!”

“I absolutely don’t think there’s anything wrong with being shy and I want her to be herself, but at the same time I know how difficult living with shyness can be, so I want to be able to help her navigate that.”

Speech and drama classes helped Egan eventually overcome her shyness. “Although it nearly killed me,” she laughs. “But it’s definitely helped with my public speaking today. I’ve been told I come across as very calm and confident in job interviews, which amazes me because I rarely feel calm and confident in those kinds of situations.”

“Going through something like childbirth has given me a lot more confidence as well – I’ve got a person to speak up for now,” she adds.

But when should I be worried?

With her daughter still under one, Egan isn’t entirely sure what her temperament will be. “If she is a shy child, I want her to know that there’s nothing wrong with that,” says Egan. “There can be power in it, too – to be sensitive, good at listening, feeling more comfortable in one-on-one and small group situations, etc. She can be the quiet kid listening in if that’s what she wants.”

“At the same time, if she’s having a hard time with it, I want to be able to give her tools to feel more comfortable and confident in social situations,” she says. “As a teenager my parents gave me great advice for doing small talk, which is just to ask a lot of questions of the people you’re with. Having this to fall back on has helped me a lot, even as an adult. One other thing I feel I can offer her is a ton of empathy and understanding.”

Freeland says parents generally don’t need to be concerned about shyness; however, social anxiety can interfere with development. “Parents should intervene or seek intervention when a child’s high anxiety level prevents their participation in typical childhood activities,” she says.

Yates agrees that this avoidance is a good indication of when it’s time for parents to actively work with their children to address the issue. She says seeking support from a child psychologist or clinical social worker can be of benefit, but there are several ways parents can help their children at home before seeking professional assistance.

Freeland recommends increasing social competence by teaching your child basic social skills such as making eye contact, smiling, asking and answering common questions, and joining in group activities. All children, regardless of whether they’re the most timid in the room or the loudest, can learn emotional self-regulation and problem solving skills for when things don’t go as they had hoped.

Role-playing scenarios help children learn positive affirmations that they can call upon when they’re feeling scared and out of their depth.

“By practicing situations at home, children can gain skills and confidence without any pressure,” says Yates. “They’re then more likely to make use of these skills in everyday life, although they will probably still need to be reminded by their parents to use them.”

Can shyness simply be outgrown?

Freeland points out that a shy child doesn’t necessarily grow into a shy adult, however for Prior, her shyness isn’t a thing of the past. “I am 53 years old and still managing it,” says Prior. “Mine hasn’t gone away, even though I hoped that writing a book about it would be a cure.”

Shyness has had a big impact on who Prior is both personally and professionally. She says it has limited her ability to connect with people she wanted to get to know better, but she’s also found it useful in pursuing her career as a writer and broadcaster. “I was so determined not to let these irrational fears stop me from doing the kind of work I wanted to do, I pushed myself way out of my comfort zone time and time again,” she says.

“I have developed lots of good strategies for dealing with it, especially in my professional life,” she says. “And I no longer feel ashamed of it. There are some positives attributes that usually go with shyness which I really value.”

In 1980 in America’s Bible Belt, a toddler named James Luke had tumours all over his body. An IV insertion caused a linear scar on his neck, while a tumour behind his left eye blinded him and another behind his right ear was biopsied.
Need some magic wordsmithery done?
Or an endless supply of whip-smart GIFs and super-cuddly cat pics?
Write To Me
Copyright Samantha Allemann 2020 - All Rights Reserved
Back To Top
×