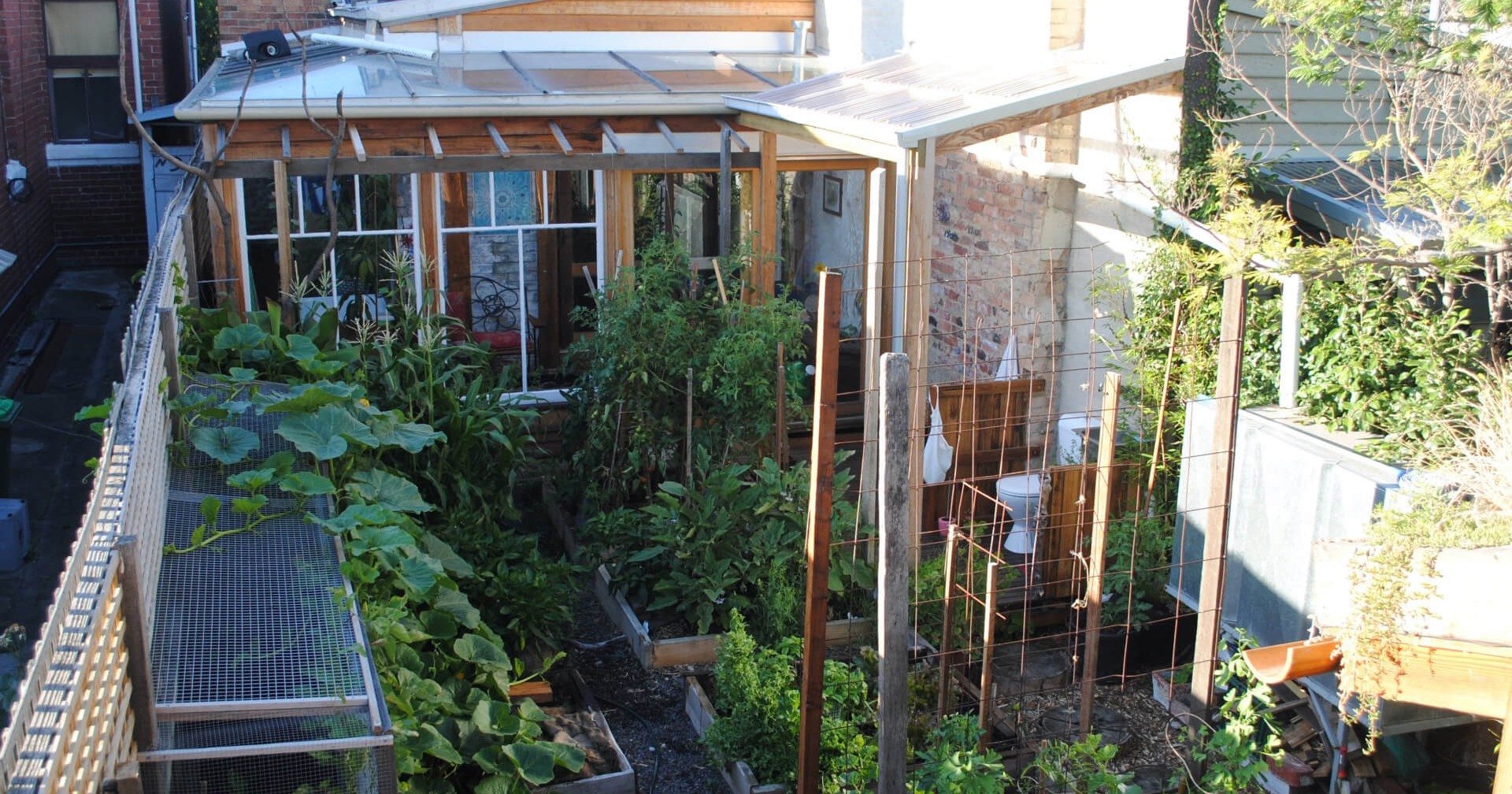 You won’t find many homes in the inner city that have intentionally shrunk to make way for a larger garden, but that’s what happened behind a bright red door in Northcote, Melbourne.

Alistair Tuffnell and Christine Baro live with their cat Peppino in a two bedroom workers cottage. When Alistair bought the house twenty years ago, it was rundown, dark, and all he could afford in the area. His partner Christine moved in three years later, and they had big plans for living off the land. “We went to Tassie where we were going to buy a farm, but that didn’t work out,” says Alistair. “So all of the things that we wanted to do down there, we thought, ‘stuff it, let’s do it here instead.”

Hesitant to take out a loan, the couple instead started small in their foray into retrofitting their home. They purchased a solar electricity system, 1.5kW (eight panels) for $5000 in 2011, which has since paid for itself.

The retrofit began a year later. One of the first priorities was letting more light into the 100-year-old cottage. With its high ceilings and narrow hallway, the house was cold and gloomy in winter. The space was opened up by demolishing the bathroom and kitchen at the back of the house, transforming it into a glasshouse. This also made the house smaller, extending the size of their north-facing garden.

While a local builder, Peter Samsonidis, led the build, the glasshouse design was Christine’s idea, inspired by the glasshouse David Holmgren created in his mother’s house.

Not only does the glasshouse bring copious amounts of light into the living room and new bathroom and kitchen, it’s also a source of passive solar. Alistair says that the temperature is usually ideal in Melbourne’s cooler months, and while it gets quite hot in summer, reeds and bamboo provide shade when needed.

Not complaining about the warmth is Peppino, who spends a lot of time sunbathing in the glasshouse, sprawled out on custom-made shelves.

The coverings also provide privacy for the shower, bathtub and toilet – pretty important considerations for the close living confines of the inner city. While the bathroom was being relocated, a five-storey apartment complex crept into the sky directly behind the house, so screens were utilised and fence screens added. “We’ve tried to make it as best we can where we’ve got privacy and the people next door don’t get to see things they don’t want to see either!” says Alistair.

The alfresco toilet sits behind a bamboo screen and is surrounded by cucuzza squash vines in summer, but having no walls or door, it’s still exposed to the rest of the garden. It was inspired by a similar design Christine saw in Guatemala. “I feel claustrophobic in an indoor toilet,” she says.

As for braving Melbourne’s winter chill when you need to go? “The alfresco toilet is amazing to acclimatise the body to the seasons,” says Christine. “Yeah, it’s cold—you just go quicker,” says Alistair.

Alistair acknowledges that the alfresco toilet is culturally challenging. “I’m very mainstream middle class—none of my friends have a toilet outside and some people just don’t feel comfortable using it,” he says. “But there’s a public toilet across the road if someone is really desperate.”

The windows of the glasshouse came courtesy of a friend who lives in Tasmania. “All we had to do was pay for shipping which was only around $100,” says Alistair.

Many of the materials came from a salvage yard in nearby Preston, with some of the wood locally sourced. A dance hall was pulled down to make way for the apartment complex, so Alistair managed to snare lots of the Oregon timber on its way out. It received new life as the doors and walls of the glasshouse and Christine’s shiatsu hut (which sits at the far end of the garden, next to the toolshed), as well as being made into an island bench for the kitchen. Other wood came from Northcote train station and the high school Alistair works at.

“All of this wood has a story of local place, some of it over a hundred years old,” says Alistair. “Its story continues as it lives as benches and rafters and so forth in our home today.”

The builder and plumber were both local, with the heavy drapes in the living room sewn by the builder’s wife, and the kitchen benchtops crafted by a friend.

“I built relationships by getting local people – that way they’re accessible when you need them for maintenance,” says Alistair. “You either have to have the skills to fix things or you need to be able to access people who have those skills.”

The retrofit took three years, allowing the couple to take their time to observe and reassess their design as needed. Plans that changed along the way included swapping the compost toilet (too hot in its desired location and impractical) for the alfresco option, and opting for recycled jarrah flooring for the glasshouse instead of gravel.

Compromises were also made, with Christine’s preference for a Hikari Japanese bath winning out over Alistair’s suggestion of a claw foot tub.

WITH A LITTLE HELP FROM FRIENDS

Alistair and Christine had no prior building experience, but they were well supported by their friends as well as the professionals they hired.

“Heaps of people were involved – it was a labour of love,” says Alistair. “People are practical when they’re given the opportunity.”

About twenty friends, including “a very strong friend going through a break-up who thought smashing down walls was the best therapy”, helped with the retrofit.

“It was all pretty informal,” says Alistair. “Just by chatting to friends, family and colleagues about our retrofit ideas did it evolve into people offering to come and help, or we asked them if we thought it was something they may be interested in or had knowledge they’d be willing to share.”

All up, the retrofit cost approximately $30,000, a modest sum considering the level of change and improvement made. The best money spent was paying their $120,000 mortgage off before the retrofit.

“To be mortgage free, although at a great personal cost (of working two jobs in my late twenties and the damage this cost me of lost time from family and personal relationships), has allowed us the time and freedom to do the self-managed retrofit we have done,” says Alistair.

The biggest cost was playing their builder, $50 an hour – money also well-spent, says Alistair. “I trusted him as he did a quality job for a fair price and he trusted me to work with him as I helped out with the grunt work of the building,” he says. “This is when I started really learning how to build/retrofit a house, because the builder was proud of his craft and I was an enthusiastic learner.”

Alistair and Christine’s retrofit has showed their friends and family another way of living.

“It’s really important to see different ways of doing things,” says Alistair. “Australian houses are getting bigger with less people living in them, so people who come over are able to see a viable alternative to that.”

buildingcommunityenvironmentalismfair foodgardeningpermaculturePip
Share This
Need some magic wordsmithery done?
Or an endless supply of whip-smart GIFs and super-cuddly cat pics?
Write To Me
Copyright Samantha Allemann 2022 - All Rights Reserved
Back To Top
×