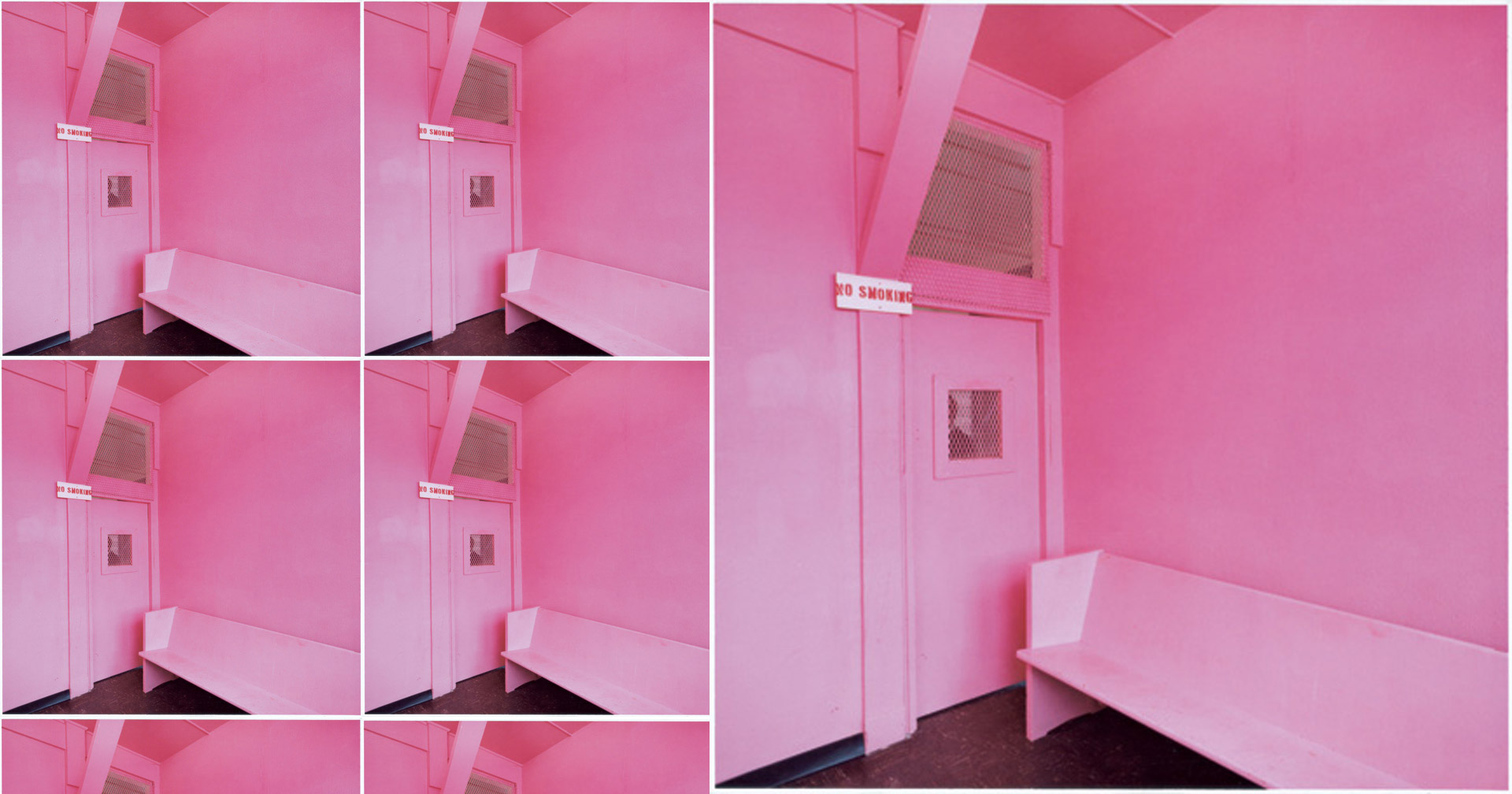 From getting the green light from the pentagon to being banned from the Olympics, this sweet shade of pink was believed to wield extraordinary powers of passivity.

In the 1970s, Alexander Schauss was a psychology student exploring whether colour could cause hormonal changes. He conducted an experiment at the end of that decade, using a shade of pink he labelled P-618 to see whether it could have a calming effect on those who looked at it.

“If I took somebody who was extremely strong and gave them a weight to lift to do curls, put a big placard of the pink colour right in front of their face, and then they tried to lift the weight again, they couldn’t as they lost all their muscle strength,” recalls Schauss. “Seconds later if I put another colour up, immediately the person’s muscles came back firing the way they were supposed to and they could do those curls as they had before.”

The colour didn’t just have a debilitating effect on bodybuilders – it also helped to quieten disruptive children. In another early experiment Schauss undertook, misbehaving kids were sent to a time-out corner of the classroom. Gazing at the pink cardboard, the children would soon calm down.

Out of control kids were one thing, but Schauss had his sights set on a bigger goal – to utilise these findings in correctional instutitions. In 1979 he approached the director of the United States Naval Correctional Center in Seattle. Commander Gene Baker told Schauss there was no way the experiment could go ahead without permission from the Defence Department at the Pentagon.

“So Baker went through the effort of contacting the Pentagon, describing the experiments that we showed him,” explains Schauss. “He told them that every day he had at least one altercation with inmates placed in a holding cell when they arrived, and if we could even reduce that by just 10% he would be extremely impressed and it also would subject his staff to less physical violence.”

The six month experiment got the go-ahead, with cells painted the exact shade of pink Schauss specified. There was only one reported incident of violence during the study. “That caught the Pentagon’s attention and it led to the attention of other correctional administrators around the country as well,” says Schauss.

This is where the name Miller comes in – the captain of the county prison in San Jose, California. Captain Ron Miller gave the go ahead to run the experiment at his prison, and after finding similar results, he shared it with other correctional administrators in California at both the adult and juvenile levels.

Word spread as to the effects of what was now coined ‘Baker-Miller Pink’, and the public’s fascination grew after documentary footage of the weakened bodybuilders featured on the popular 1980s TV show That’s Incredible!. The doco captivated audiences, airing three times over two years.

Viewers wanted to bring Baker-Miller Pink into their lives, with the hope of getting its disarming properties with it. They bought pink paint by the bucketloads but were dismayed that they weren’t getting the reported results, something that Schauss puts down to the picture quality of televisions at that time. “We started having people who thought they knew the colour just by watching it on TV,” he says. “But on the screen it was really a sort of orange red tint, or a yellow red tint.”

To rectify the issue, Schauss published the results of the experiment and offered to send anyone who read the research paper a swatch of Baker-Miller Pink, direct from the original buckets used. “We sent out thousands of swatches,” he says. “Everybody who got the swatches got the same results, and for those who relied on their own intuition and would use descriptions such as ‘bubble gum pink’, the results weren’t accurate. You actually had to have that precise colour.”

Around this time Schauss was contacted by the famous 70s fashion designer Halston. “Halston said, ‘Look, this is really interesting what this colour is rumoured to do. Is there any chance you could send me a swatch?’,” says Schauss. “I did, and to my total surprise he designed a Baker-Miller Pink coloured robe and shorts for a professional boxer.”

The underdog boxer entered the arena in Madison Square Garden kitted out in his pink outfit and gloves. “So here’s this other boxer staring at him, the bell rings, they start fighting and about 40 seconds later he knocks out the champion,” says Schauss.

Soon after the bout Schauss received a request from the Dallas Cowboys. “Tex Schramm, the coach at the time, was quite blunt about what he was thinking. He said, ‘Is there any chance if we painted the locker room of our visiting teams that it could weaken the opponent’s muscles before we get on the field?’” Schauss recalls.

“I said I had no idea but nevertheless I sent him a swatch. He did it and the next thing we know the National Football League banned it, but not before a lot of schools across the country repainted their visiting locker rooms pink. In Washington State suddenly a team which normally would never win games were now defeating much stronger teams. It would then eventually be banned in the Olympics and other professional sports as well,” says Schauss.

Bus seats and walls were painted Baker-Miller Pink to deter vandalism and violence. Housing estates painted their elevators the colour for the same reason. It became the uniform colour of United Way of America fundraisers – their charitable collections went up around 200%.

Along with the swatches circulating, people started selling Baker-Miller Pink making kits. The desire to utilise the purported powers of the colour were reaching far and wide. “Attorneys started thinking ‘When we’re in settlement agreements in our law office, if we paint the opposing side of the walls Baker-Miller Pink, it might reduce the opposing sides’ resistance’,” says Schauss.

This was the breaking point for Schauss, as the commercial and perhaps unethical uses of the colour started growing. “It just got totally out of control and I said enough’s enough. This was not why we did the research, so I decided to walk away from it.”

But not before he conducted a follow-up experiment on the colour, only to find that the new findings showed little or no changes in violent behaviour. The follow-up paper, ‘A Test of the Tranquilizing Pink Hypothesis’, deduces that it could have been the novelty of a fresh coat of paint (of any colour) that reduced instances of violence, instead of it being the effects of Baker-Miller Pink.

Public demand for the colour died down in the 1980s, yet the colour is still used in some prison settings, particularly in Switzerland and Austria. Schauss continued with his academic career, and in the mid 1990s was a lead researcher in the Western discovery of the antioxidant properties of the açaí berry – the purple-coloured fruit that has had a burst of popularity in recent years. The resulting hype must’ve reminded Schauss of the height of the Baker-Miller Pink demand – a period he didn’t profit much from.

Schauss never registered Baker-Miller Pink or filed a patent. “That was of no interest to me whatsoever,” he says. “It was about trying to find different ways that we could use colour to effect beneficial pro-social behaviour patterns in humans. It wasn’t about money.”

Many of us dream about working from home – sitting at our desk in our pyjamas, only having to commute down the hallway or garden path.

"If you build it, they will come" – is Field of Dreams your favourite movie?…

Need some magic wordsmithery done?
Or an endless supply of whip-smart GIFs and super-cuddly cat pics?
Write To Me
Copyright Samantha Allemann 2020 - All Rights Reserved
Back To Top
×