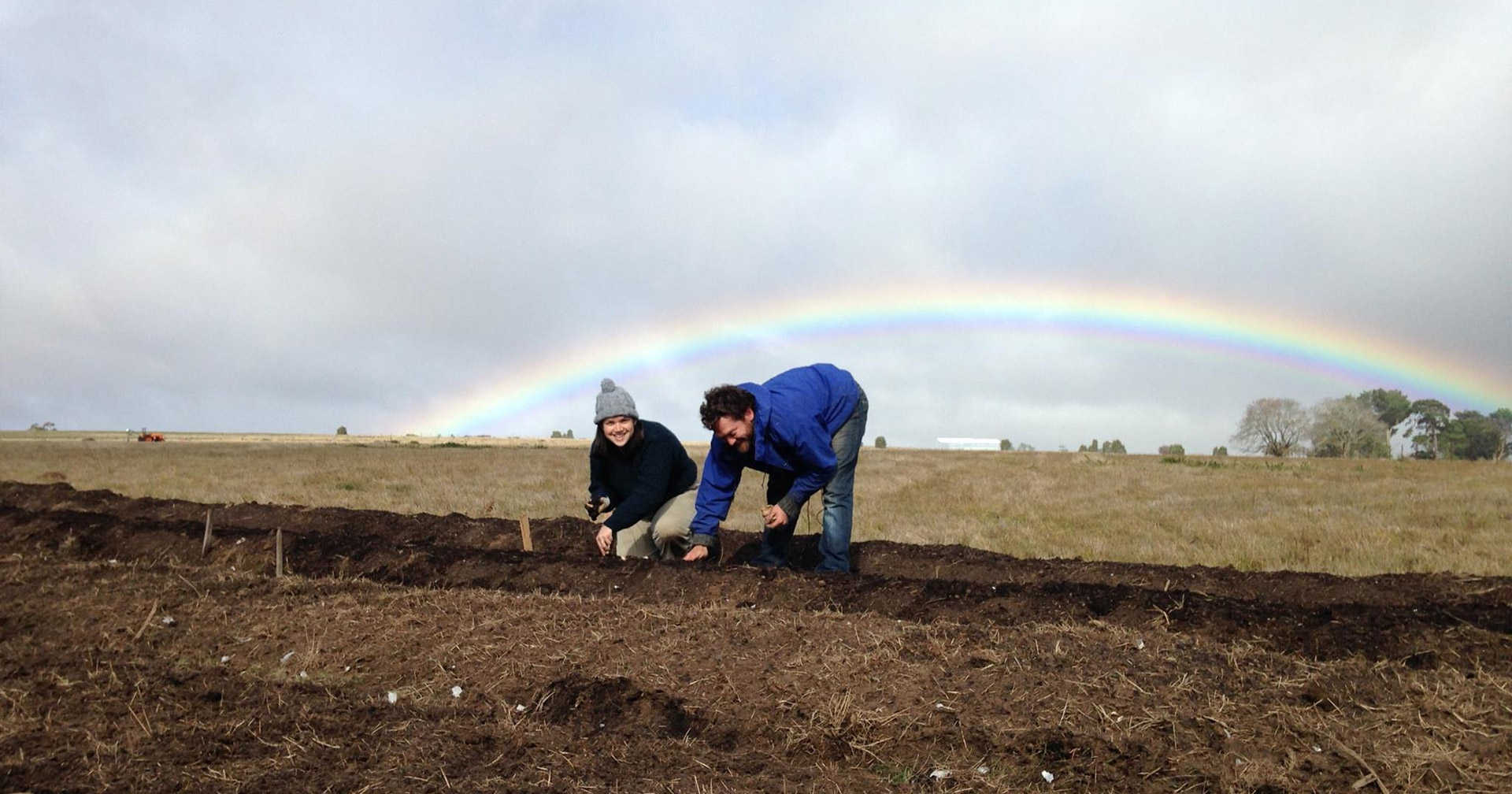 Growing garlic may not be too tricky, but growing farmers can be. To help young prospective farmers gain the skills and experience they need in the field, Farmer Incubator was established in Victoria in 2013 by Paul Miragliotta. Melbourne based landscape gardener Per Staurup soon joined the small group due to his interest in “making sure there are good farmers out there and that people who deserve the chance to do it can”.

“We see the leasing of land as one of the most difficult barriers,” Per says. “Most of the young farmers we’ve talked to have had land passed down to them.”

Having put the call out for underutilised farm land, Farmer Incubator were “provided on a handshake basis” free beds on an annual basis in Coburg, Ballan, Keilor and Moorooduc farmlets. Through social media posts and a flurry of flyering, the group began recruiting people for their first initiative, Pop Up Garlic Farmers. Per explains that garlic was a natural choice for their experiential learning program.

“It’s a winter crop so it doesn’t require much water, the land requirements are reasonable and weeding isn’t a huge task,” Per says. The growing popularity of this bulbous plant added to its appeal. “Seventy percent of my meals start with garlic,” Per says. “And there are all sorts of fun things happening to garlic now too, like black garlic, and people pickling it. It’s a versatile crop and it’s got that essence of gourmet as well.”

Garlic’s long-term seed to market process and its good storage ability made it an ideal fit for the program’s one year timeframe, and allowed time for six workshops (on planting and cultivating, soils and agronomy, marketing and harvesting) to be taught throughout the year. For $450, each of the twelve participants were given a patch of land at one of the four properties and handed 500 plants for them to sow the seed, tend the crop and take to market.

Emily Connors is a Pop Up Garlic Farmer who had long held farming dreams.

“I’ve been a try hard country girl since I was little,” Emily laughs. “I’d wear flannelette shirts and Blundstones that I’d try to dirty up. It was like I’d been dreaming of this since I was young.”

Excited to hear that the program was being run near her house, she signed up to work on the Coburg site. “We’re right on the Merri Creek bike path, so as we’re weeding people are poking their heads over and asking what’s going on, giving us tips and offering to jump in and help weed!” Emily says.

This direct community involvement, as well as the support network within Farmer Incubator’s program, has come as a lovely surprise to this budding farmer. “There’s this image of a farmer on the land looking out into the distance, being quite isolated, but farming with a group of people has been really nurturing,” Emily says. “We can transform that image.”

Per has also enjoyed the social side of the program. “Insurance is complicated, costings are never quite right and breaking pasture is hard work,” he answers when I ask about the challenges faced during the year. “But the initiative of the participants had been amazing, our workshop speakers have been so inspirational and the interest from the community overall has been so encouraging.”

“We hope that the farmers have learned some of the complexities and joys of small scale farming,” Per says. “Some farmers have been challenged more than others because of their previous experience and the plot they chose, but we believe this is a first step for them to find a way into farming and to also create a strong community that supports each other.”

It will be market time come February, which will signal the highly anticipated sales result for the garlic farmers, who are hoping to make their money back or at least break even. Per says that at this stage it’s too early to tell what the outcome will be, however as all of the garlic grown is being lumped together, the outcome will truly be a team result.

Pulling a carrot out of…

The Plummery sounds like a sprawling countryside property. Its garden beds grow an abundance of vegetables, with surrounding fruit and nut trees underplanted with shrubs, herbs and flowers. Bubblegum grape shades the house and there’s a greenhouse with bananas and babaco. A quail aviary sits by the side of the house and on the southern side are avocados, feijoas and a cherry guava.
Need some magic wordsmithery done?
Or an endless supply of whip-smart GIFs and super-cuddly cat pics?
Write To Me
Copyright Samantha Allemann 2021 - All Rights Reserved
Back To Top
×