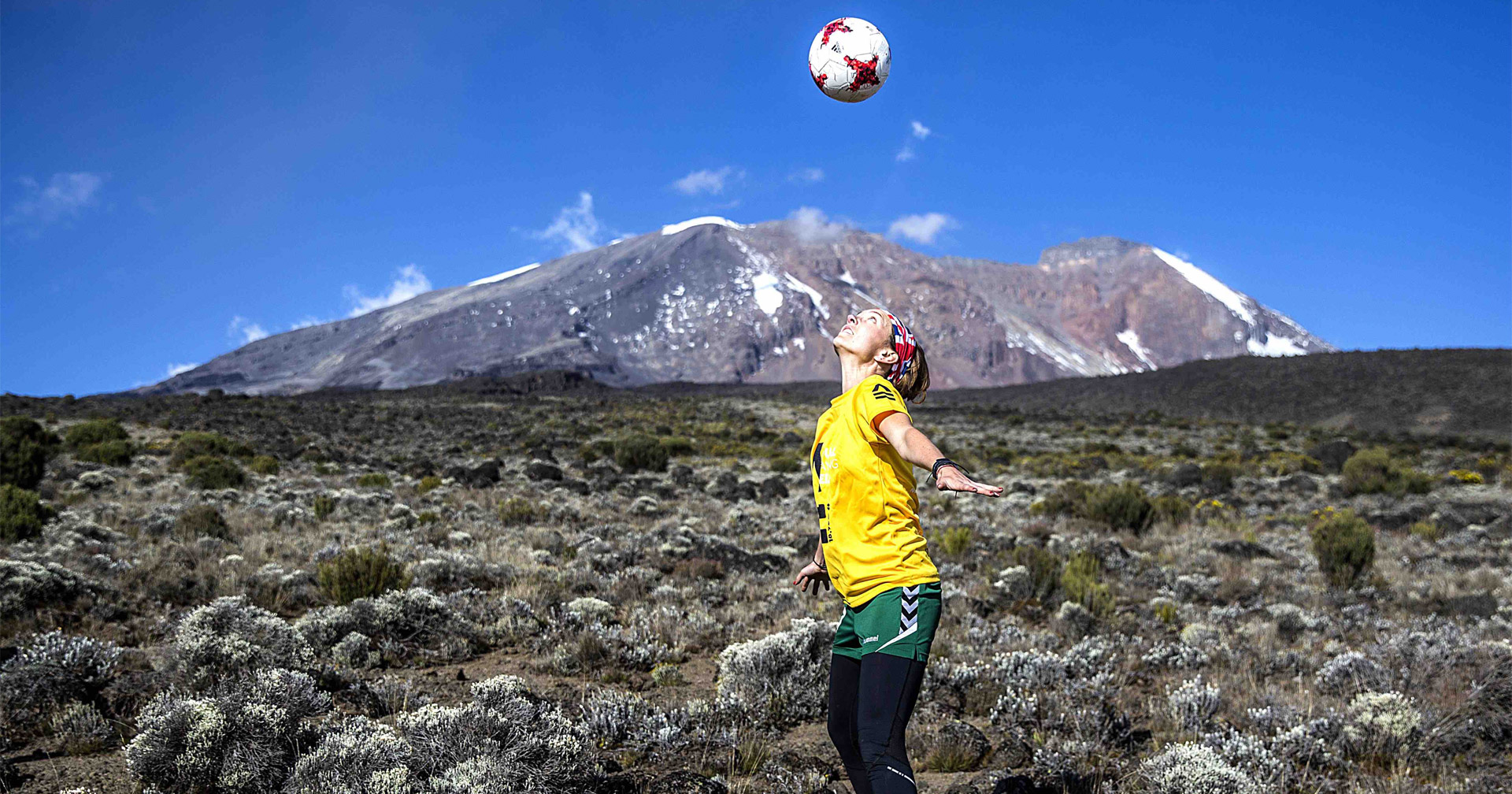 Laura Youngson is not the type of person to sit back and seethe. Annoyed that a women’s soccer team didn’t receive funding while the men’s team did, Laura established the Equal Playing Field initiative to promote women in sport. “That’s where the idea came from, to do something so outrageous and so ridiculously difficult that people would think, ‘you did that? that’s crazy!’,” she says. And as far as challenges go, playing soccer at the top of Mount Kilimanjaro is up there.

But there was no shortage of athletes keen to play in the highest altitude football game in the world. “We really tried to reach as many different nationalities as possible and get that variety of people, because it made the group so much stronger,” says Laura. A team of 30 women from six continents and with different levels of playing experience (from pros such as Lori Lindsey to grassroots players) was assembled. 18 months of prep went into establishing safety measures and increasing fitness levels.

“Everyone who came along had to play or at least train twice a week to have a base level of fitness for climbing the mountain,” explains Laura. “We had a training program about six months out, and three months out we really upped the game. Some people were lucky enough to go to altitude chambers in Dubai and London.” In Melbourne, Laura hit the pool to build up her lungs.

“Once everyone met in Tanzania, we had our first practice game,” she says. It took a week to reach Mount Kilimanjaro’s summit, and once there, the game got off to a tentative start. “For 10 minutes everyone played a little bit cautiously. Then the doctor did the check-in and said, ‘you’re good’, and it became this really competitive game.” Flour was used to outline the volcanic ash pitch, with hiking poles repurposed as goals. 90 minutes later, the match was over, the world record netted.

Since the triumphant game in June, Equal Playing Field are now focused on running soccer camps and clinics around the world. “We recently ran one in Jordan which had 150 girls who had never kicked a ball before,” says Laura.

They’re also brainstorming their next challenge, which Laura is looking forward to. “One of the best parts of the trip was the bonding experience,” she says. “You get to have these conversations and understand what it’s like in other countries; there’s more similarity than you’d think. And I wake up to about 100 WhatsApp messages from the group across all time zones. It’s like The Fellowship of the Ring, we’ve got our mountain sisters. It’s a really strong connection.”

Koky Saly keeps his promises. Searching for a way to fund his charity BabyTree Projects, Koky cottoned on to using discarded fabrics to make backpacks.

If the promise of endorphins aren’t enough to get you moving, how about knowing the health of the planet can be helped by you going for a run? Across the world, ultrarunners, sprinters and joggers are dedicating some of their runs to looking after the environment, proving that exercise can be a form of activism.
Need some magic wordsmithery done?
Or an endless supply of whip-smart GIFs and super-cuddly cat pics?
Write To Me
Copyright Samantha Allemann 2022 - All Rights Reserved
Back To Top
×