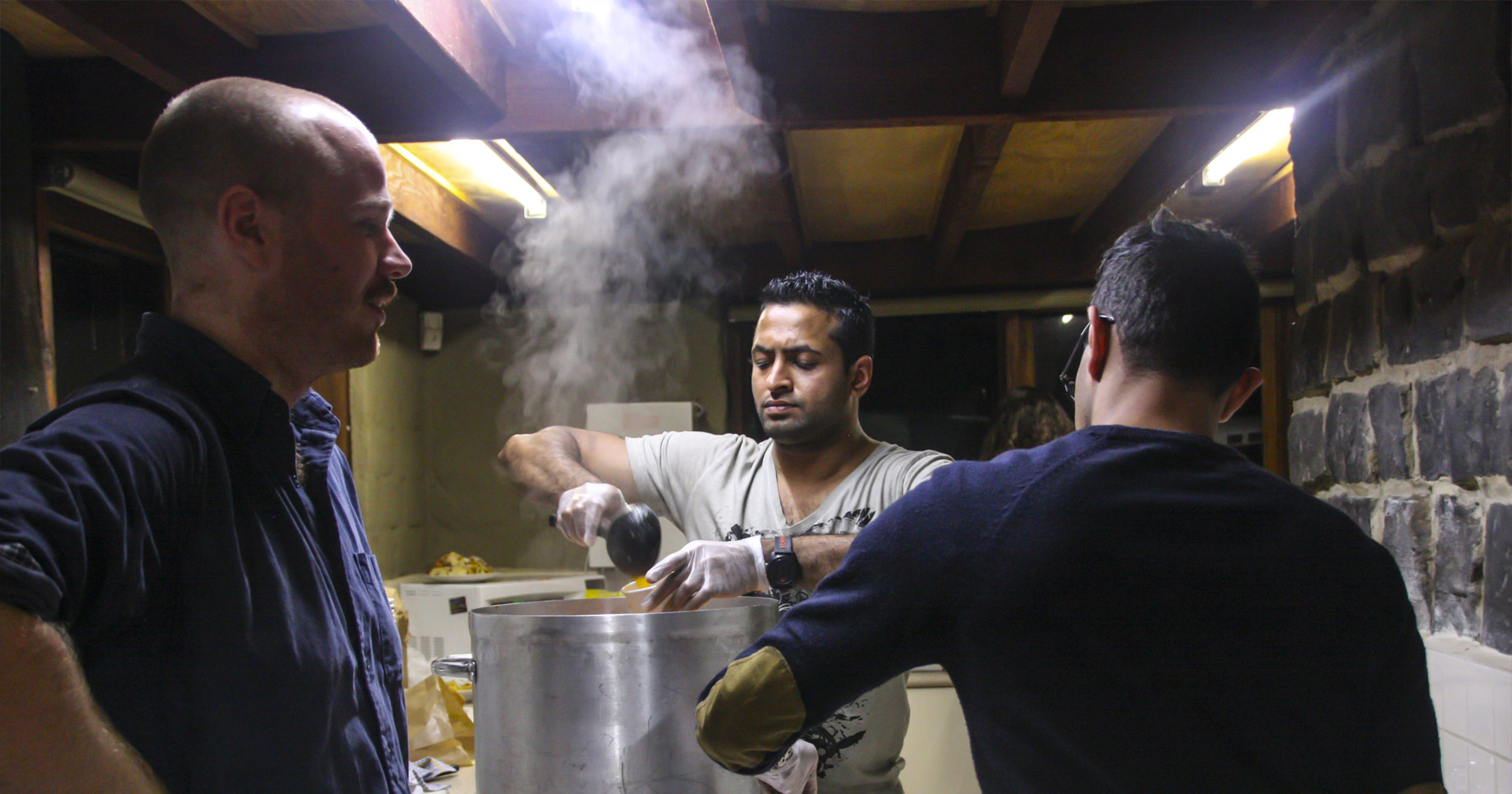 Eight billion dollars. That’s the staggeringly high cost of edible food that Australians waste each year, according to Do Something’s recent Food Waste campaign. It’s a figure shocking enough to put you off your lunch.

But for Georgia Hutchison and her friend Tullia Jack, it was the perfect inspiration to put on lunch – in 2013, they started Open Table, a non-profit organisation that actively addresses food waste and social isolation by hosting free community dinners using salvaged food otherwise destined for the bin.

Open Table’s wholesome community feasts enable folks from all walks of life to learn some of the issues surrounding our food system as they break bread together over rescued produce.

Over a shared meal, Georgia and Tullia started brainstorming schemes to “create something that would connect us with our neighbours and redistribute some of the absurd amount of food that is wasted every day,” Georgia explains. “I’m not sure if there was a ‘light bulb’ moment; perhaps this is a misconception about innovation and action in general!” she reflects. “It wasn’t about that singular perfect idea or moment. It was a whole lot of talking about how things could be better, and a whole lot of heads and hands making it happen… the idea of sharing food and making do is not a new idea. Starting with some grand ideas, we soon decided to take a simple approach.”

This manifested as a not-for-profit food redistribution and community connectedness project called Open Table. Its mission is bringing people together to enjoy a communal meal featuring food that otherwise would have gone straight to landfill. Non-exclusive in its reach, Open Table’s open door approach welcomes anyone who wants to attend the events to come along.

Georgia, Tullia, their friends Liam, Anthony and Viv and a whole host of volunteers took Open Table from the idea stage to a six-week pilot at Melbourne’s Brunswick Neighbourhood House in early 2013. They approached innovative food rescue initiative Second Bite (which sources food from ‘The Big Two’ supermarkets and distributors before they hit the dumpsters) and Moreland City Council to get their initial events off the ground. Through referrals to support agencies and community groups, lots of postering and flyering around town and establishing a social media presence, Open Table gained momentum and the Brunswick pilot was a hit.

“Despite the sometimes odd flavour combinations and awkward conversations, we soon started to collect regulars and established Open Table as a permanent and ongoing monthly feast,” Georgia recalls. “The pilot was such an excellent way to start, as it tested ideas, built momentum and brought us all together. We had really supportive and constructive feedback from the Brunswick Neighbourhood House and they invited us to keep at it.”

Spurred by their success, the Open Table team soon realised that their model could easily be picked up by other neighbourhoods around the country wanting to host similar events.

“The new events emerged through conversations over dinner, as they do!” says Georgia. “I’m so inspired by these great people who have the motivation and prowess to make things happen.” She is quick to credit the “many, many hands” that make Open Table’s success “definitely a group effort the whole way through.”

Thanks to the power of community, in 2014 the concept spread to other Melbourne venues in Collingwood, Fitzroy and Fawkner, with each event location secured by locals working in collaboration with their councils and social work organisations. Community kitchens found within housing estates, neighbourhood houses or senior citizens’ centres were also used, thanks to their winning combination of convenience and modest charm.

In addition to Second Bite’s food donations, community gardens and local businesses in the neighbourhoods where Open Table hosts events have also become involved. “It gives us access to a great variety of local produce and baked goods which would otherwise be wasted,” Georgia says. “We’re even lucky to have flowers on our tables from local florists.”

“In Fawkner, we welcome a large community of Islamic refugee families and young people, as well as the more established Italian community,” says Georgia. “And Brunswick has a lot of younger students and artists, as well as the lovely guys from the local Supported Residential Service, Brunswick Lodge. We certainly have our regulars and there are also people who come and go for a meal or to help with the dishes.”

“We might be cooking for fifty or so in Brunswick, compared to hundreds at the Fawkner Saturday lunch. One of the biggest lunches we served was in the Community Hall at the National Gallery of Victoria for the ‘Melbourne Now’ exhibition, where we had almost 500 people come through!”

The food isn’t the only appeal of an Open Table event – the community connection aspect also a draw card for those wanting to engage with others. However, since talking to strangers can sometimes be intimidating, the Open Table crew create an inviting atmosphere by playing music, making up communal tables and involving people in the preparation stage.

“I find the act of ‘doing’ something helps to start conversations,” explains Georgia. “And sometimes it takes a conversationalist to bring people together and find a good dynamic. Luckily our volunteers are very charming!”

While there are a few key organisers and board members within Open Table, most of the work is done by volunteers, with Georgia’s and Tullia’s friends, family and housemates getting on board. “We have up to fifty volunteers at one time working across Melbourne; cooking food, making salads, serving soups, writing tweets and filling in funding applications.”

Ensuring there’s no divide between ‘helper’ and ‘helpee’ is vital, says Georgia. “Sometimes if we get an over-zealous ‘helper’, we ask for them to be our conversation starters. It really is about making a very casual and homely atmosphere.”

Open Table’s meals have moved beyond the vegetarian quiches the team were serving up when they first started. “Since then we’ve had a much more experimental approach to the menu,” Georgia explains. “Most people like to try something new, and if it’s a bit unusual it can be a conversation starter!”

“Our aim with the food is to make it both healthy and appealing to a wide range of people. The produce we get from Second Bite is the base from which we create our different feasts. The menu is always spontaneous with a make-do approach, ensuring we incorporate as much of the produce as possible. We also incorporate food from community gardens, farmer’s co-ops and other streams of surplus and seasonal goodies.”

“We were very lucky at one of our first ever Open Tables to have Praveen [Vegunta, of Sugardough Panificio & Patisserie], a professional chef, who came and offered to be involved from the goodness of his heart. He oversaw the early development of our menu and food safety plan. Over the years we’ve been blessed with a variety of cooks. The two constants are a health and safety induction, and a love of food.”

While there are minimal costs involved in running the events, such as insurance and a car share subscription, Georgia says they “get by on the smell of an oily rag (or a hot lunch).” Thankfully, that oily rag is about to get a welcome reprieve – Open Table recently won operational funding for the next few years through Moreland City Council’s community grants program.  “It will allow us to buy all the biodegradable napkins we need for the next three years!” Georgia says.

Open Table’s aims go beyond putting on a good spread. In Australia, we discard up to 20% of the food we buy and 40% of our rubbish bin contents is food, so educating people about how to reduce food waste is an Open Table priority. Early in 2014, Open Table co-created a crowd-grown-and-harvested feast and screened ‘The Growing Food Project’ film as part of Melbourne’s Sustainable Living Festival. They also ran a food waste panel at their packed National Gallery of Victoria event where they discussed Australian attitudes towards everyday sustainability and how to make positive changes to the food system on both individual and community levels.

“We have lots of plans and dreams for the future, based on ideas of collaboration, sharing and education,” Georgia explains. “My attitude to making positive cultural change through education is to build the framework, and then generate an atmosphere and attitude that makes reducing food waste the best and most obvious choice. In our case, we raise the issue occasionally, but we implement the values and knowledge in our behaviour.”

“We have so many ideas and potential to grow,” she continues, “but at the moment we just hope to be consistent and create a resilient, slow growing organisation that can create long lasting change in our communities. We’re always up for conversations about how to reduce food waste and engage communities through sharing. The solution might not always be a dinner party, but it’s a good place to start.”

The Plummery sounds like a sprawling countryside property. Its garden beds grow an abundance of vegetables, with surrounding fruit and nut trees underplanted with shrubs, herbs and flowers. Bubblegum grape shades the house and there’s a greenhouse with bananas and babaco. A quail aviary sits by the side of the house and on the southern side are avocados, feijoas and a cherry guava.
Contact
Copyright Samantha Allemann 2023 - All Rights Reserved
Back To Top
×